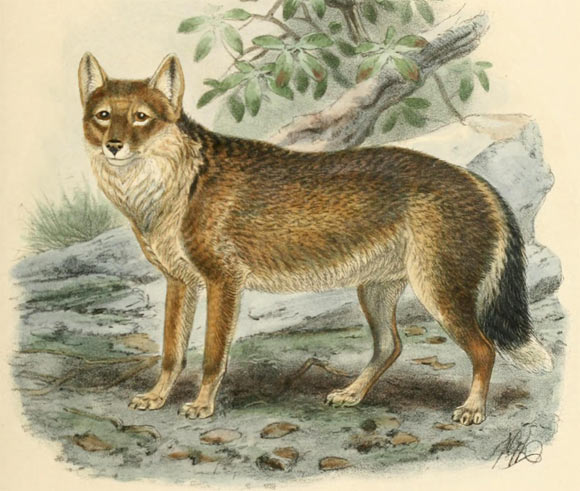 Traditionally it had been supposed that the most closely related genus was Lycalopex, including the culpeo, which has been introduced to the Falkland Islands in modern times. However, in 2009, a cladistic analysis of DNA identified the Falkland Island wolf’s closest living relative as the maned wolf (Chrysocyon brachyurus)—an unusually long-legged, fox-like South American canid, from which it separated about 6.7 million years ago.

The Falkland Islands wolf existed on both West and East Falkland, but Charles Darwin was uncertain if they were differentiated varieties. Its fur had a tawny colour and the tip of the tail was white. Its diet is unknown, but, due to the absence of native rodents on the Falklands, probably consisted of ground-nesting birds such as geese and penguins, seal pups, and insects, as well as seashore scavenging. It has sometimes been said that it may have lived in burrows.

The first recorded sighting was by Capt. John Strong in 1690. Captain Strong took one of the animals on his ship, but during the voyage back to Europe the creature became frightened by the firing of the ship’s cannon and jumped overboard. Louis Antoine de Bougainville, who established the first settlement in the Falkland Islands termed it a loup-renard (“wolf-fox”). The name “warrah” is a corruption of the term aguará (meaning “fox” in Guaraní, a Native American language), because of its similarity to the maned wolf (aguará guazú). The warrah’s Latin name translates into “foolish dog of the south”, because of its apparent lack of fear of people.

When Charles Darwin visited the islands in 1833 he found the species present in both West and East Falkland and tame. However, at the time of his visit the animal was already very rare on East Falkland, and even on West Falkland its numbers were declining rapidly. By 1865, it was no longer found on the eastern part of East Falkland. He predicted that the animal would join the dodo among the extinct within “a very few years.” It was hunted for its valuable fur, and the settlers, regarding the wolf as a threat to their sheep, poisoned it. However, the belief that Falkland Islands wolf was a threat to sheep was probably due to the sheep mistaking the Falkland Islands wolves for dogs (especially at night), and, in terror, the sheep ran into bogs and swamps, where they became lost. There were no forests for the animal to hide in, and it had no fear of man; it was possible to lure the animal with a chunk of meat held in one hand, and kill it with a knife or stick held in the other. However, it would defend itself occasionally if it needed to, as Admiral George Grey noted when they landed on West Falkland at Port Edgar on 17 December 1836:

I landed in the creek and had hardly put a foot on shore, when one of the foxes of the country was chased by Pilot. I ran up as they were fighting and came to the poor dog’s assistance who had nearly met his match, and a rifle ball soon settled the business, but the Pilot had received a terrible bite in the leg.

A live wolf was taken to London Zoo, England in 1868. Another “Antarctic wolf” arrived in 1870. Neither animal survived long. Only a dozen or so museum specimens exist today.

In 1880, after the animal became extinct, Thomas Huxley classified it as related to the coyote. In 1914, Oldfield Thomas moved it to the genus Dusicyon, with the culpeo and other South American foxes. (These other canids have since been removed to Lycalopex.)

Darwin writing about his 1834 visit to the Falklands in his Journal and Remarks (The Voyage of the Beagle) has the following to say of Canis antarcticus:

The only quadruped native to the island, is a large wolf-like fox, which is common to both East and West Falkland. Have no doubt it is a peculiar species, and confined to this archipelago; because many sealers, Gauchos, and Indians, who have visited these islands, all maintain that no such animal is found in any part of South America. Molina, from a similarity in habits, thought this was the same with his “culpeu“; but I have seen both, and they are quite distinct. These wolves are well known, from Byron’s account of their tameness and curiosity; which the sailors, who ran into the water to avoid them, mistook for fierceness. To this day their manners remain the same. They have been observed to enter a tent, and actually pull some meat from beneath the head of a sleeping seaman. The Gauchos, also, have frequently killed them in the evening, by holding out a piece of meat in one hand, and in the other a knife ready to stick them. As far as I am aware, there is no other instance in any part of the world, of so small a mass of broken land, distant from a continent, possessing so large a quadruped peculiar to itself. Their numbers have rapidly decreased; they are already banished from that half of the island which lies to the eastward of the neck of land between St Salvador Bay and Berkeley Sound. Within a very few years after these islands shall have become regularly settled, in all probability this fox will be classed with the dodo, as an animal which has perished from the face of the earth. Mr Lowe, an intelligent person who has long been acquainted with these islands, assured me, that all the foxes from the western island were smaller and of a redder colour than those from the eastern. In the four specimens which were brought to England in the Beagle there was some variation, but the difference with respect to the islands could not be perceived. At the same time the fact is far from improbable.

Dusicyon avus, known from fossils from southern South America as recent as 1600 years ago, was a close mainland relative of the Falkland Islands wolf.

In terms of skull shape and feeding habits, the animal was an opportunistic predator, more like a jackal.

The route by which the Falkland Islands wolf was established in the islands was unknown for a long time, as the islands have never been connected to the mainland and there are no other native land mammals. No other oceanic island as remote as the Falklands has a native canid; the island fox of California in the US and Darwin’s fox of Chile both inhabit islands much closer to a continent.

Berta and other authors suggest that it was unlikely that the wolf’s ancestors could have survived the last Ice Age on the Falklands and they must therefore have arrived later, within the last ten thousand years, crossing a wide expanse of the South Atlantic. Its close relative, Dusicyon avus, did survive in South America until a few thousand years ago, but swimming such a distance or even drifting on a floating log would appear effectively impossible for the wolf. Some speculated that the species had originally arrived with indigenous peoples visiting the islands after the settlement of the Americas, having been kept by them in a semi-domesticated state. There is, however, no definite evidence that humans ever visited the Falklands before the Age of Discovery (the islands are not visible from the mainland, and traveling to the Falklands in open canoes would have been very difficult and extremely dangerous) nor is there any evidence that the ancestors of the wolf were ever domesticated.

DNA of the extinct mainland relative, D. avus, analyzed in 2013 suggests that its genetic history diverged from the Falkland Islands wolf only some 16,000 years ago, during the last glacial phase. This is strong evidence that the ancestors of the wolf were isolated on the islands only since the last glacial maximum. A 2009 analysis of mitochondrial DNA from five museum specimens of the Falkland Islands wolf indicated that they had multiple mitochondrial haplotypes whose most recent common ancestor lived about 330,000 years ago, giving some idea of the genetic diversity of the founding population.

An Ice Age land bridge or ice connection between the Falkland Islands and South America, enabling the species’ ancestors to traverse the gap, has long been suggested. There was never a true land bridge between the islands and South America, but submarine terraces have been found on the Argentine coastal shelf, formed by low sea-stands during the last glacial phase. This suggests that there was a shallow strait as narrow as 20 km, which may have frozen completely at times. It seems likely that the founding population of the wolf crossed on this ice bridge during the last Ice Age. This would explain the absence of other mainland mammals on the islands; an ice crossing is much more difficult than crossing a land bridge.