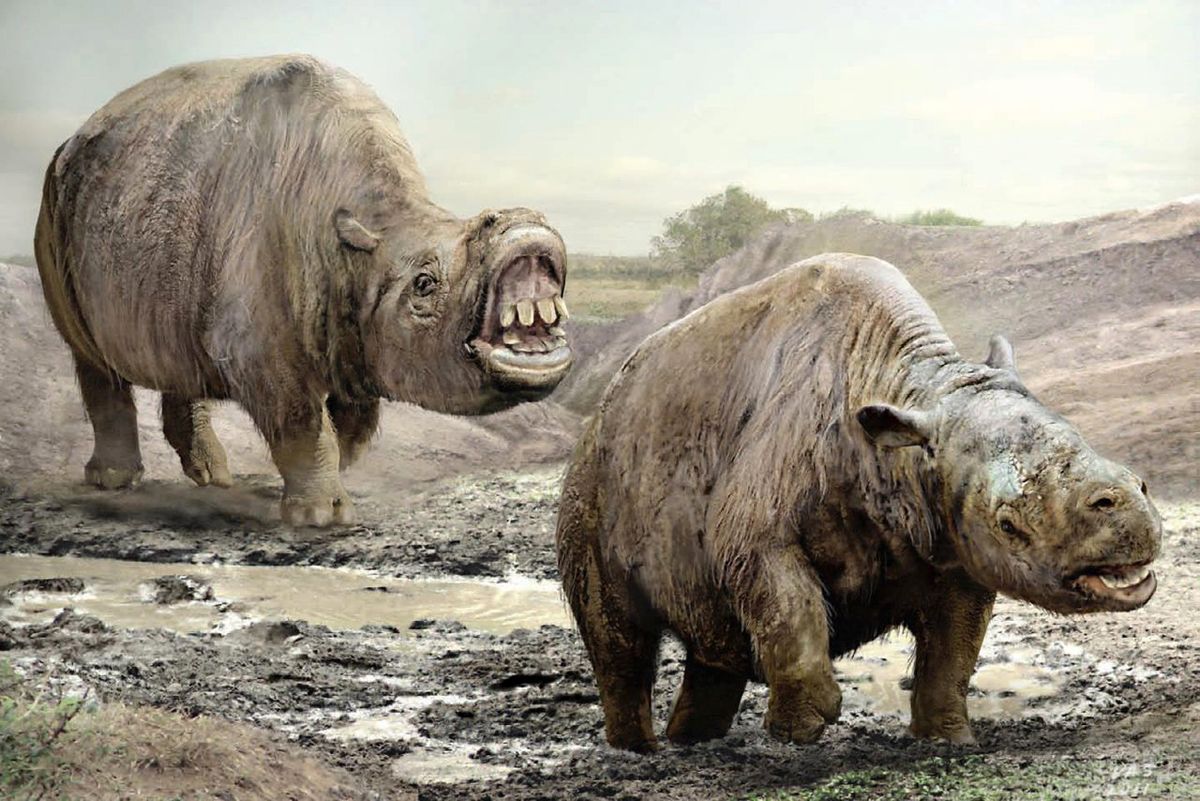 Toxodon (meaning “bow tooth”) is an extinct genus of South American mammals from the Late Miocene to Middle Holocene epochs (Mayoan to post-Lujanian in the SALMA classification) (about 11.6 million to 5000 years ago). It is a member of Notoungulata, one of several now extinct orders of hoofed mammals indigenous to South America. It was among the largest and last members of its order, and was probably the most common large-hoofed South American mammal of its time.

Charles Darwin was one of the first to collect Toxodon fossils, after paying 18 pence for a T. platensis skull from a farmer in Uruguay. In The Voyage of the BeagleDarwin wrote, “November 26th – I set out on my return in a direct line for Monte Video. Having heard of some giant’s bones at a neighbouring farm-house on the Sarandis, a small stream entering the Rio Negro, I rode there accompanied by my host, and purchased for the value of eighteen pence the head of the Toxodon.”Since Darwin discovered that the fossils of similar mammals of South America were different from those in Europe, he invoked many debates about the evolution and natural selection of animals.

Analysis of collagen sequences obtained from Toxodon as well as from Macrauchenia found that South America’s native notoungulates and litopterns form a sister group to perissodactyls, making them true ungulates. This finding has been corroborated by an analysis of mitochondrial DNA extracted from a Macrauchenia fossil, which yielded a date of 66 Ma for the time of the split with perissodactyls.

In 2014, a study identifying a new species of toxodontid resolved the phylogenetic relations of the toxodontids, including to Toxodon.

Toxodon was about 2.7 m (8 ft 10 in) in body length, with an estimated weight up to 1,415 kg (3,120 lb) and about 1.5 m (4 ft 11 in) high at the shoulder and resembled a heavy rhinoceros, with a short and vaguely hippopotamus-like head. Because of the position of its nasal openings, it is believed that Toxodon had a well-developed snout. It had a massive skeleton, which suggests that it supported a large muscular body. It had short stout legs with three functional toes, with most of the body weight being borne by the central toe.

The vertebrae were equipped with high apophyses, which most likely supported the massive weight and muscles as well as its powerful head. Toxodon had broad jaws which were filled with bow shaped teeth and incisors. These teeth would have allowed the animal to tear through and bite off plants and leaves.

It was initially believed to have been amphibious, but after examining the proportions of the femur and tibia, as well as the position of its head, below the top of the spinal column, palaeontologists realized that it had features similar to terrestrial animals such as elephants or rhinoceroses. The fossils are also usually found in arid and semi-arid areas, typically an indication of a primarily terrestrial life.

Toxodon would have had a very unusual gait, due to its peculiar proportions. It may have galloped to escape predators, but like a rhino, it probably relied more on its size as protection against predators.

Toxodon became extinct in the Middle Holocene. Many Toxodon fossils have been found accompanied by arrow heads. This shows that prehistoric humans hunted them, which could have been a leading cause of their demise.

Fossils of Toxodon have been found in: